Massive hurricanes striking Miami or Houston. Earthquakes leveling Los Angeles or Seattle. Deadly epidemics. Meet the “maximums of maximums” that keep emergency planners up at night. ... The people who try to keep the nation ready for these doomsday scenarios call them the Maximums of Maximums, or the MOMs. You might call them the mothers of all disasters. The term comes from the Federal Emergency Management Agency, and for the feds, it generally includes a small universe of possibilities: a major hurricane, a major earthquake, or an improvised nuclear device. ... In a rebuke to a techno-utopian age, natural disasters remain a greater threat than almost anything humans can produce. ... natural disasters are often abetted by humans. Construction in floodplains, lax building codes, lack of preparation, the malign effects of climate change, and even underinsurance exacerbate the impact of the disasters. The number of weather-related disasters that cost more than $1 billion has been gradually increasing over the last few decades ... The challenge of preparedness is convincing people who are not movie directors or emergency managers to do the same.

Houston is the fourth-largest city in the country. It’s home to the nation’s largest refining and petrochemical complex, where billions of gallons of oil and dangerous chemicals are stored. And it’s a sitting duck for the next big hurricane. Why isn’t Texas ready? ... Such a storm would devastate the Houston Ship Channel, shuttering one of the world’s busiest shipping lanes. Flanked by 10 major refineries — including the nation’s largest — and dozens of chemical manufacturing plants, the Ship Channel is a crucial transportation route for crude oil and other key products, such as plastics and pesticides. A shutdown could lead to a spike in gasoline prices and many consumer goods — everything from car tires to cell phone parts to prescription pills. ... After decades of inaction, they hoped that a plan to build a storm surge protection system could finally move forward. ... Several proposals have been discussed. One, dubbed the “Ike Dike,” calls for massive floodgates at the entrance to Galveston Bay to block storm surge from entering the region. That has since evolved into a more expansive concept called the “coastal spine.” Another proposal, called the “mid-bay” gate, would place a floodgate closer to Houston’s industrial complex. ... The 10 refineries that line the Ship Channel produce about 27 percent of the nation’s gasoline and about 60 percent of its aviation fuel ... Flooding is the most disruptive type of damage an industrial plant can experience from a hurricane. Salty ocean water swiftly corrodes critical metal and electrical components and contaminates nearby freshwater sources used for operations.

Although wildfires in the American West dominate headlines, the single most destructive fire in U.S. history could occur in the Northeast. New Jersey's Pinelands (also known as the Pine Barrens) is the lone island of contiguous forest in the 45-million-person megacity that comprises the Eastern Seaboard from Richmond, Virginia, to Boston — the densest population cluster in the country. Whereas regular fires used to thin out the Pinelands, large swaths have remained relatively untouched for decades due to strict preservation laws. The result is a giant tinderbox of untended woods that's surrounded by 100,000-person suburbs. A Wildfire Risk Assessment published by New Jersey compared the Pinelands to "an inch of gasoline covering all of south and central New Jersey." ... In wildland firefighting, success does not breed success. Stopping fires in their infancy allows forests to grow thicker and more at risk of bad blazes. Before the Forest Service started fighting fires, around 1910, lightning strikes and native peoples used to burn around 50 million Western acres each year. Today, some 30,000 wildland firefighters and their equipment — smokejumpers, fire engines, air tankers — check that number at around 11 million. If that sounds impressive, it's worth noting that 50 years ago about a third as many firefighters kept the annual acreage burned to roughly half what it is today. The flames have become that much harder to control.

The global catastrophic risks in this report can be divided into two categories. Some are ongoing and could potentially occur in any given year. Others are emerging and may be very unlikely today but will become significantly more likely in the coming decades. The most significant ongoing risks are natural pandemics and nuclear war, whereas the most significant emerging risks are catastrophic climate change and risks stemming from emerging technologies. Even where risks remain in the future, there are things we can do today to address them. ... The relative likelihood and urgency of the different risks matters when deciding how to respond. Even though the level of uncertainty is extreme, rational action requires explicit assessments of how much attention the different risks deserve, and how likely they are. The views of the authors on these vexed questions, based on our reading of the scientific evidence, are summarised in the following table. More information can be found in the full version of this report. 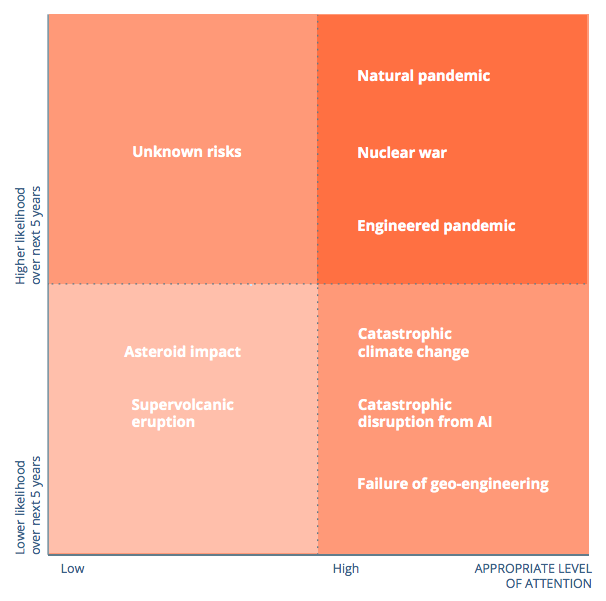 In 1978, the United States Geological Survey (USGS) allocated over half its research budget ($15.76 million) to earthquake prediction, a level of spending that continued for much of the next decade. Scientists deployed hundreds of seismometers and other sensors, hoping to observe telltale signals heralding the arrival of the next big one. They looked for these signs in subterranean fluids, crustal deformations, radon gas emissions, electric currents, even animal behavior. But every avenue they explored led to a dead end. ... Since the early 20th century, scientists have known that large quakes often cluster in time and space: 99 percent of them occur along well-mapped boundaries between plates in Earth’s crust and, in geological time, repeat almost like clockwork. But after decades of failed experiments, most seismologists came to believe that forecasting earthquakes in human time—on the scale of dropping the kids off at school or planning a vacation—was about as scientific as astrology. By the early 1990s, prediction research had disappeared as a line item in the USGS’s budget. ... Defying the skeptics, however, a small cadre of researchers have held onto the faith that, with the right detectors and computational tools, it will be possible to predict earthquakes with the same precision and confidence we do just about any other extreme natural event, including floods, hurricanes, and tornadoes. The USGS may have simply given up too soon. After all, the believers point out, advances in sensor design and data analysis could allow for the detection of subtle precursors that seismologists working a few decades ago might have missed. ... At a time when American companies and institutions are bankrolling “moonshot” projects like self-driving cars, space tourism, and genomics, few problems may be as important—and as neglected—as earthquake prediction.

Mass, who is 64, has become the most widely recognized critic of weather forecasting in the United States — and specifically the National Oceanic and Atmospheric Administration, which manages the National Weather Service and its underling agencies, including the National Centers for Environmental Prediction, where the nation’s weather models are run. Mass argues that these models are significantly flawed in comparison with commercial and European alternatives. American forecasting also does poorly at data assimilation, the process of integrating information about atmospheric conditions into modeling programs; in the meantime, a lack of available computing power precludes the use of more advanced systems already operating at places like the European Center for Medium-Range Weather Forecasts, based in Reading, England. And there are persistent management challenges, perhaps best represented by the legions of NOAA scientists whose innovations remain stranded in research labs and out of the hands of the National Weather Service operational forecasters who make the day-to-day predictions in 122 regional offices around the country. ... accuracy is everything, often the difference between life and death, given that extreme weather ... Industries like shipping, energy, agriculture and utilities lose money when predictions fail. Even slightly more precise wind-speed projections would help airlines greatly reduce fuel costs. ... the Weather Service interface was so primitive — the protocol was originally designed for the telegraph — it could only accommodate uppercase type.

Survivalism, the practice of preparing for a crackup of civilization, tends to evoke a certain picture: the woodsman in the tinfoil hat, the hysteric with the hoard of beans, the religious doomsayer. But in recent years survivalism has expanded to more affluent quarters, taking root in Silicon Valley and New York City, among technology executives, hedge-fund managers, and others in their economic cohort. ... In private Facebook groups, wealthy survivalists swap tips on gas masks, bunkers, and locations safe from the effects of climate change. ... impulses are not as contradictory as they seem. Technology rewards the ability to imagine wildly different futures ... How many wealthy Americans are really making preparations for a catastrophe? It’s hard to know exactly; a lot of people don’t like to talk about it. ... That night, I slept in a guest room appointed with a wet bar and handsome wood cabinets, but no video windows. It was eerily silent, and felt like sleeping in a well-furnished submarine.