Combined stock repurchases by U.S. public companies have reached record levels, a Reuters analysis finds, but as the recent history of such iconic businesses as Hewlett-Packard and IBM suggests, showering cash on shareholders may exact a long-term toll. ... A Reuters analysis shows that many companies are barreling down the same road, spending on share repurchases at a far faster pace than they are investing in long-term growth through research and development and other forms of capital spending. ... Almost 60 percent of the 3,297 publicly traded non-financial U.S. companies Reuters examined have bought back their shares since 2010. In fiscal 2014, spending on buybacks and dividends surpassed the companies’ combined net income for the first time outside of a recessionary period, and continued to climb for the 613 companies that have already reported for fiscal 2015. ... In the most recent reporting year, share purchases reached a record $520 billion. Throw in the most recent year’s $365 billion in dividends, and the total amount returned to shareholders reaches $885 billion, more than the companies’ combined net income of $847 billion. ... Among the 1,900 companies that have repurchased their shares since 2010, buybacks and dividends amounted to 113 percent of their capital spending, compared with 60 percent in 2000 and 38 percent in 1990. ... For decades, the computer hardware, software and services company has linked executive pay in part to earnings per share, a metric that can be manipulated by share repurchases.

The past five years have been challenging for long-term value-based asset allocation. We do not believe this constitutes a paradigm shift, dooming such strategies in the future. The basic driver for long-term value working historically has been the excessive volatility of asset prices relative to their underlying fundamental cash flows, and recent history does not show any evidence of that changing. Outperforming the markets given that pattern requires either betting that the excessive swings will reverse over time or accurately predicting what those excessive swings will be. The former strategy amounts to long-term value-based investing, while the latter requires outpredicting others as to both what surprises will hit the markets and how the markets will react to them. Our strong preference is to focus on long-term value, despite the inevitable periods of tough performance that strategy will entail. ... The volatility of U.S. stocks since 1881 has been a little over 17% per year. The volatility of the underlying fair value of the market has been a little over 1% per year. Well over 90% of the volatility of the stock market cannot be explained as a rational response to the changing value of the stream of dividends it embodies. This means that the volatility is due to some combination of changing discount rates applied to those cash flows, and changes to expectations of future dividends that turned out to be incorrect. It is difficult to determine exactly which has been the driver at any given time, but there doesn’t seem to be a lot of evidence for changing discount rates having been a major force. Even in the most extreme overvaluation in U.S. stock market history, the 1999-2000 internet bubble, none of the investors we heard explaining why the stock market was rational to have risen to such giddy heights explained it on the basis that future returns should be lower than history. 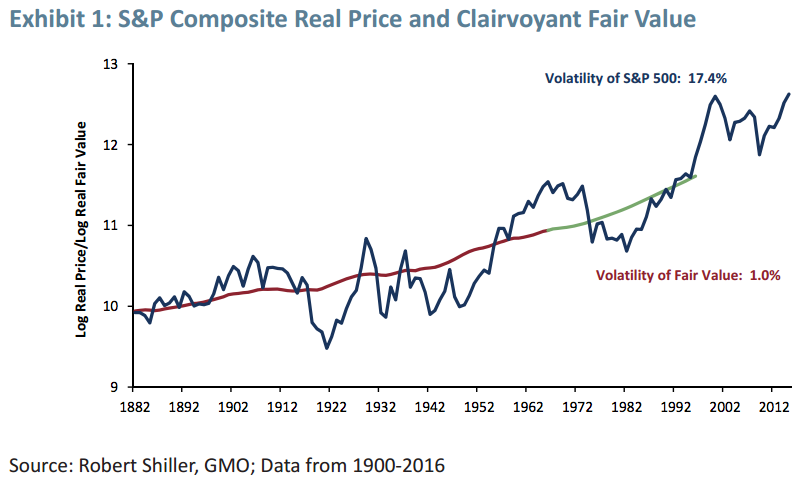