Today we have the highest living standards in human history that co-exist with an ability to destroy our planet ecologically and ourselves through nuclear war. We are in the greatest period of stability with the largest probabilistic tail risk ever. The majority of Americans have lived their entire lives without ever experiencing a direct war and this is, by all accounts, rare in the history of humankind. Does this mean we are safe from the risk of devastating conflict on our own soil? ... Peace has a dark side. Peace can exist due to hidden conflict in the Prisoner’s Dilemma. ... Global Capitalism is trapped in its own Prisoner’s Dilemma; forty four years after the end of the Bretton Woods System global central banks have manipulated the cost of risk in a competition of devaluation leading to a dangerous build up in debt and leverage, lower risk premiums, income disparity, and greater probability of tail events on both sides of the return distribution. Truth is being suppressed by the tools of money. Market behavior has now fully adapted to the expectation of pre-emptive central bank action to crisis creating a dangerous self-reflexivity and moral hazard. Volatility markets are warped in this new reality routinely exhibiting schizophrenic behavior. The tremendous growth of the short volatility complex across all assets, combined with self-reflexive investment strategies, are creating a dangerous ‘shadow convexity’ that will fuel the next hyper-crash. Central banks in the US, Europe, Japan, and China now own substantial portions of their own bond or equity markets. We are nearing the end of a thirty year “monetary super-cycle” that created a “debt super-cycle”, a giant tower of babel in the capitalist system. As markets now fully price the expectation of central bank control we are now only one voltage switch away from the razors edge of risk. Do not fool yourself - peace is not the absence of conflict – peace can exist on the very edge of volatility. ... Since 2012, the Federal Reserve have been engaged in a pre-emptive war against financial risk, and other central banks are forced to follow suit in a self-reinforcing cycle of devaluation and a mad game of Prisoner’s Dilemma. This unofficial, but clearly observable policy has the unintended consequence of socializing risk for private gain and introduces deep ‘shadow’ risks in the global economy. ... At this stage, absent continuous intervention, a large deflationary crash in the global economy is inevitable. The greatest risk is that if central banks continue a policy of competitive devaluation and hyper-asset bubbles the end result will be an even more devastating crash, followed by sovereign defaults, and then class warfare. The next Lehman brothers will be a country. The real ‘shadow convexity’ will not come from markets but political unrest or war. ... History shows us that economic recovery from a depression has never been successfully engineered without major debt reduction, devaluation, default, hyperinflation, political revolution, or world war. 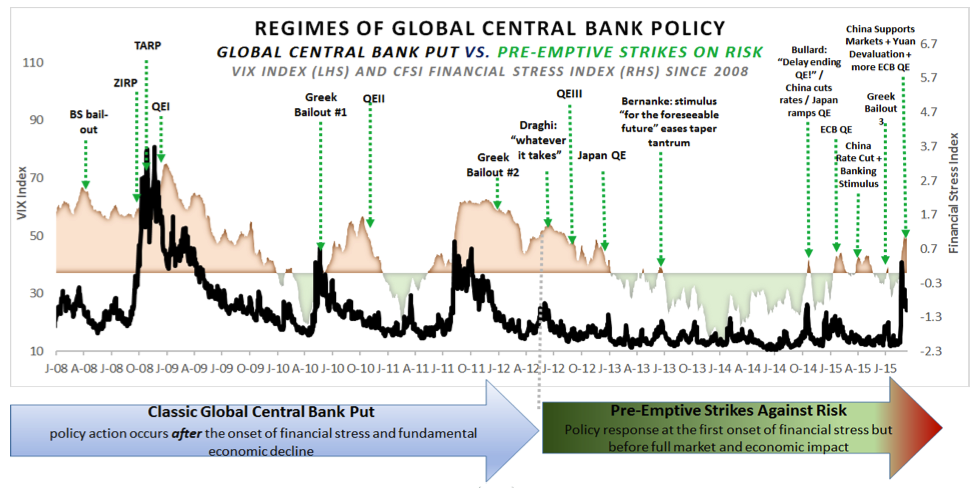