Our research shows that the emerging economies’ share of Fortune Global 500 companies will probably jump to more than 45 percent by 2025, up from just 5 percent in 2000. That’s because while three-quarters of the world’s 8,000 companies with annual revenue of $1 billion or more are today based in developed economies, we forecast that an additional 7,000 could reach that size in little more than a decade—and 70 percent of them will most likely come from emerging markets. To put this dramatic shift in the balance of global corporate power in perspective, remember that many of the world’s largest companies have maintained their current status for generations: more than 40 percent of the 150 Western European companies in last year’s Fortune Global 500 had been founded before 1900. … The rebalancing of the global business landscape will probably be even faster and more dramatic than the shift of economic growth to emerging regions. Large companies matter, and not just for their ability to create jobs and generate higher incomes; they are also forces for increased productivity, innovation, standard setting, and the dissemination of skills and technology. Their geographic shift will have profound implications for the nature of competition, including not only the race for resources and talent but also, more broadly, the emerging markets’ efforts to reach the next level of economic development and prosperity. 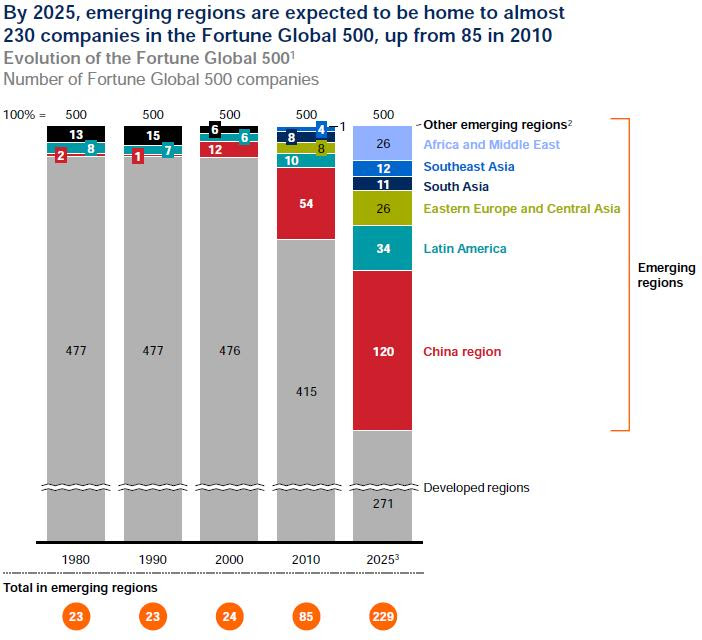 Is it any wonder investors are questioning why they allocate to emerging markets in the first place? Even going beyond the woes of emerging, we are starting to hear some investors asking whether holding non-U.S. stocks is at all necessary. As market historians we can say that the timing of such sentiments tends to be bad – no one seems to ever decide to give up on an asset class after it has just had good performance, and the last burst of “why bother with non-U.S. stocks” occurred just before the top for the S&P 500 in 2000. But just complaining that investors got it wrong last time they voiced these sentiments does not qualify as thoughtful analysis. ... while emerging markets “deserved” some of their bad luck over the last several years and the outperformance of the U.S. has made some sense, we do not believe that emerging is a value trap, nor do we believe that the U.S. has proved itself particularly extraordinary. ... In total, we can surmise that emerging currencies are a “risk asset” of sorts and that they have delivered a return above U.S. cash over time and should probably continue to do so given the capital needs and vulnerabilities of emerging economies. ... even if the U.S. has somehow managed to unlock the secret to permanently high profits and the economy remains solid, it seems unlikely that the secret will remain an entirely U.S. phenomenon. If we imagine a world in which U.S. profitability is able to remain well above historical levels, we would expect non-U.S. companies to begin to copy their American counterparts, similar to the way profitability converged from the 1970s to the early 2000s. ... we have seen an impressive expansion of American profitability that has not been mirrored in the rest of the world, and U.S. stocks have duly outperformed. This has, not surprisingly, led investors to try to convince themselves of the inherent superiority of U.S. stocks to justify continuing to hold them. We cannot completely reject the possibility that those arguments are correct, but the evidence seems pretty thin.