Rodney Durham stopped working in 1991, declared bankruptcy and lives on Social Security. Nonetheless, Wells Fargo lent him $15,197 to buy a used Mitsubishi sedan. ... “I am not sure how I got the loan,” Mr. Durham, age 60, said. ... Mr. Durham’s application said that he made $35,000 as a technician at Lourdes Hospital in Binghamton, N.Y., according to a copy of the loan document. But he says he told the dealer he hadn’t worked at the hospital for more than three decades. Now, after months of Wells Fargo pressing him over missed payments, the bank has repossessed his car. ... This is the face of the new subprime boom. Mr. Durham is one of millions of Americans with shoddy credit who are easily obtaining auto loans from used-car dealers, including some who fabricate or ignore borrowers’ abilities to repay. The loans often come with terms that take advantage of the most desperate, least financially sophisticated customers. ... Auto loans to people with tarnished credit have risen more than 130 percent in the five years since the immediate aftermath of the financial crisis, with roughly one in four new auto loans last year going to borrowers considered subprime — people with credit scores at or below 640. ... While losses from soured car loans would be far less than those on subprime mortgages, the red ink could still deal a blow to the banks not long after they recovered from the housing bust. Losses from auto loans might also cause the banks to further retrench from making other loans vital to the economic recovery, like those to small business and would-be homeowners. ... In another sign of trouble ahead, repossessions, while still relatively low, increased nearly 78 percent to an estimated 388,000 cars in the first three months of the year from the same period a year earlier, according to the latest data provided by Experian. The number of borrowers who are more than 60 days late on their car payments also jumped in 22 states during that period. 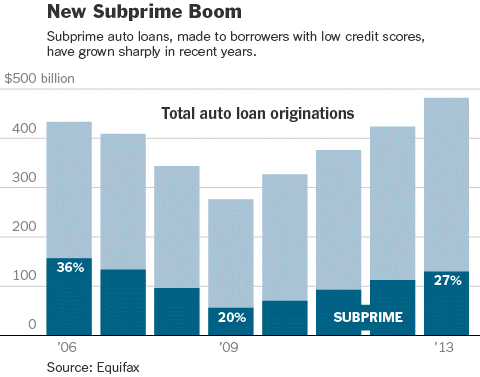 On a typical day Westlake finances 750 cars. It currently has 336,000 outstanding loans, each originating from one of the 23,000 dealerships it works with (everyone from CarMax to small mom-and-pop used car lots). ... most of Hankey’s borrowers aren’t average–they are financial underachievers with credit scores below 600. Many have bankruptcies, past repossessions or limited credit histories–things that make them unattractive to traditional lenders. That’s where Hankey steps in. While Westlake offers loans as low as 1.65%, it specializes in financing credit-challenged car buyers–at an eye-popping rate of 19%, more than double the average for used car loans. ... They typically shell out $344 per month over 49 months, or $16,860 on a $12,000 loan. That translates to an extra $3,920 in interest over the life of the loan when compared to the 3.67% rate a borrower with good credit gets when buying a new car, according to Experian. Sure, each month the company has to write off about $17 million in unpaid loans, but it still banks a profit of around $20 million. In 2014 Westlake netted $230 million on $600 million in revenues. ... He joined forces with the ride-share leviathan in September 2014 as its only outside financing partner. Spanish bank Santander had been working with Uber, offering a lease-to-own program, but that relationship ended earlier this year. Would-be Uber drivers who are looking to purchase a car can get pre-qualified online in a matter of minutes. ... so far a greater portion of its Uber drivers are behind on their payments compared to its typical subprime borrowers, apparently not earning enough to cover the costs.