A remote island, an Arctic expedition, a one-way trip to Mars – what drives our urge to explore the farthest reaches? ... People tend to go out to the edges of things. Which things, exactly, depends on the era: 1.8 million years ago, our early ancestors moved overland out of Africa. Thousands of years ago, early Polynesians sailed outrigger canoes over the horizon, eventually populating the entire Pacific. In the late 19th century, nearly every year a new batch of European explorers headed northwards, throwing themselves into the jaws of the ice. Today, the planet’s atmosphere seems to be the edge of choice. It is not clear how many people applied to be on Mars One’s much-discussed mission to colonise the Red Planet, but what is clear is that a one-way ticket away from Earth sets some people’s eyes alight. ... That the urge to explore is glorious and universal is one of today’s most persistent romances. It has yielded great rewards for the people who go and for their societies; leaving the known is a fast way to learn new things. ... Yet exploration is not as obvious a thing to revere as you might think. It is often absurd. ... The tendency to become restless in the absence of something new they dubbed ‘sensation-seeking’. ... The key, though, is that there must also be people who don’t want to ramble, who turn their talents and energies to exploiting, to the best of their abilities, the place where they have settled. If there are too many explorers, the group is likely to starve.

In this essay I want to build on some of the ideas that were developed in my last essay specifically as they pertain to thinking about asset markets. The most obvious place to start is with the idea that the natural rate of interest is a myth. Accepting this idea has many ramifications for the way in which one conducts asset pricing. ... Perhaps the clearest implication from my previous essay with respect to investing is that the cash rate is potentially unanchored. That is to say, without a natural rate it isn’t obvious what cash rate one should expect to see in the long term. ... If, like any number of my colleagues, you don’t believe a word I’ve written (and quite possibly think that I either have escaped from or belong in an asylum), then let me leave you with one last chart. Even if you believe that real interest rates do matter for equity market valuations, and, hence, that lower real rates justify higher sustainable levels of P/E, you still need to ask yourself the following question: Would I need to believe that today’s U.S. equity market valuations represent fair value? 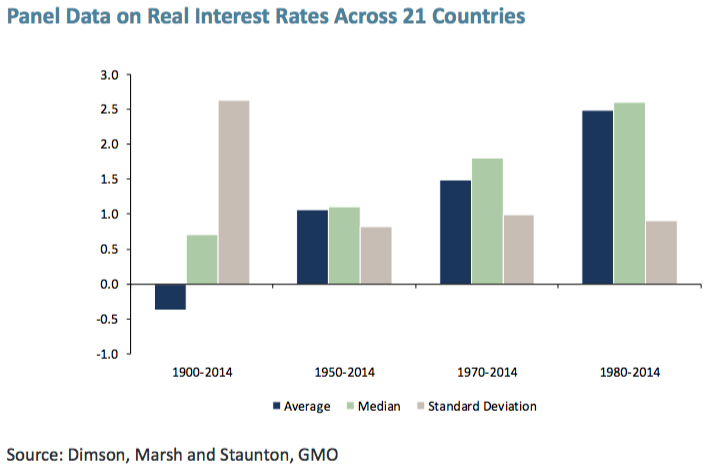 The farm-by-farm fight between China and the United States to dominate the global food supply. ... If China hopes to feed (and pacify) its growing population while also loosening the very real stranglehold that America has on its national food supply, its farmers have to start producing a lot more corn—not just enough to meet their domestic demand in good years but enough to maintain a stockpile to offset their global market impact during bad ones. For decades, China has increased corn yields by putting more acres into production, but they’re running out of arable land, and the USDA now estimates that Chinese corn consumption will rise by 41 percent by 2023, far outpacing production increases. The only tenable way for China to meet its own demand, then, is by planting high-performance hybrids, which can single-handedly double or potentially even triple per-acre corn production. Chinese scientists haven’t developed a significant corn hybrid in years. But Monsanto and DuPont Pioneer, the two American seed giants, have produced so many successful hybrids that they now control 45 percent of all the seed sold in the world. ... The Department of Justice maintains that China is quietly permitting and even encouraging companies to steal American agricultural secrets right out of the ground. Acquiring the technology behind these next-generation hybrids could save companies like DBN Group—and the country—as much as a decade, and many millions of dollars, in research.

Twenty years ago today, Netscape’s shares began trading. To many the initial public offering of Netscape marked the beginning of the Internet age. It was certainly the first event that signified to the world outside of Silicon Valley how big the Internet could be. Much has changed since then but much remains that same. Netscape has largely disappeared. But technology companies, after the boom and bust that followed Netscape’s deal, are hot once again. These days it’s more about apps and smart phones than the Internet that Netscape opened for so many users two decades ago. And, unlike then, many of the hottest companies of the current tech boom are opting to stay private, and put off an IPO for as long as possible, ironically following the advice of Marc Andreessen, one of Netscape’s founders. Ten years ago, Fortune compiled an oral history of Netscape and its IPO. Many of the people involved in the deal are once again key figures in the current tech boom.

President Franklin Delano Roosevelt once told the head of the Office of Strategic Services (precursor to the CIA), “Give my regards to the catcher.” The catcher was Moe Berg, who spent 15 seasons in the majors before taking up espionage for the government. Spyball tells the extraordinary story of Berg, a linguist/Ivy-educated lawyer/.243 lifetime hitter whom manager Casey Stengel called “the strangest man to ever play the game of baseball.” Berg walked in eclectic circles, counting Babe Ruth, Albert Einstein, and the Marx Brothers among his friends, but it was his service to his country that truly distinguished him. His surreptitious filming of Tokyo during a 1934 baseball tour helped develop strategies for the eventual bombing of the city during World War II, and his cloak-and-dagger mind games involving a German scientist helped prove that the Nazis were failing in their attempts to develop an atomic bomb.