The Land of the Free is starting to look ungovernable. Enough is enough … America enjoys the “exorbitant privilege” of printing the world’s reserve currency. Its government debt is considered a safe haven, which is why Uncle Sam can borrow so much, so cheaply. America will not lose these advantages overnight. But anything that undermines its creditworthiness—as the farce in Washington surely does—risks causing untold damage in the future. It is not just that America would have to pay more to borrow. The repercussions of an American default would be both global and unpredictable. … It would threaten financial markets. Since American Treasuries are very liquid and safe, they are widely used as collateral. They are more than 30% of the collateral that financial institutions such as investment banks use to borrow in the $2 trillion “tri-party repo” market, a source of overnight funding. A default could trigger demands by lenders for more or different collateral; that might cause a financial heart attack like the one prompted by the collapse of Lehman Brothers in 2008. In short, even if Obamacare were as bad as tea-party types say it is (see Lexington), it would still be reckless to use the debt ceiling as a bargaining chip to repeal it, as some Republicans suggest.

In mid-August, Jim DeMint, the South Carolina Republican who quit the Senate in January to become president of the Heritage Foundation, the conservative Washington think tank, set off on a nine-city Defund Obamacare Town Hall Tour. DeMint, 62, is a courtly, polished Southerner who used to own a marketing business. These days he’s selling the idea that it’s not too late to kill the health-care law. In each city, hundreds and sometimes thousands of true believers crammed into hotel ballrooms to hear him explain how, with enough pressure on legislators, Congress could be persuaded to withhold funding for the law and thereby halt it before public enrollment begins on Oct. 1. “The House holds the purse strings,” DeMint told his crowds. If Republicans keep them cinched, he promised, the law would fail. ... DeMint’s idea was initially dismissed as quixotic. For one thing, the Affordable Care Act is mostly paid for by mandatory funds that can’t be blocked. For another, Democrats control the White House and Senate. Even so, the defund push has caught fire in Washington because activists have made it into a crusade.

Rising disability claims may explain America’s shrinking labour force … IN THE early 1980s the distressing persistence of high unemployment in Europe was labelled “Eurosclerosis”. Some now wonder whether “Amerisclerosis” is the right word to describe America’s labour market. It is true that unemployment has slowly dropped from a peak of 10% in late 2009, to 7.3% at present. But this decline overstates the health of the jobs market. … The labour-force participation rate, the share of the working-age population either working or looking for work, has plunged from 66% in 2007 to 63.2% in August, a 35-year low. If those people who have simply dropped out of the labour force were classified as unemployed, the headline jobless rate would be much higher. 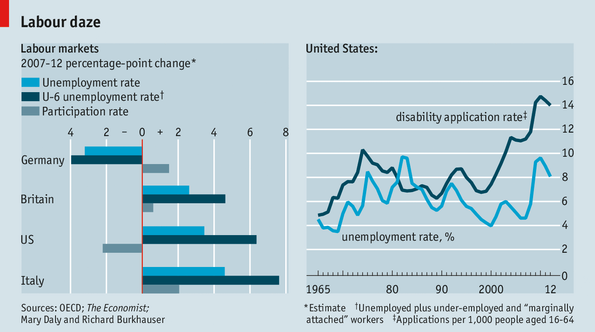 Restricting companies from moving abroad is no substitute for corporate-tax reform ... Tightening the rules on corporate “inversions”, as these moves are called, does nothing to deal with the reason why so many firms want to leave: America has the rich world’s most dysfunctional corporate-tax system. It needs fundamental reform, not new complications. ... America’s corporate tax has two horrible flaws. The first is the tax rate, which at 35% is the highest among the 34 mostly rich-country members of the OECD. Yet it raises less revenue than the OECD average thanks to myriad loopholes and tax breaks aimed at everything from machinery investment to NASCAR race tracks. Last year these breaks cost $150 billion in forgone revenue, more than half of what America collected in total corporate taxes. ... The second flaw is that America levies tax on a company’s income no matter where in the world it is earned. In contrast, every other large rich country taxes only income earned within its borders. Here, too, America’s system is absurdly ineffective at collecting money. Firms do not have to pay tax on foreign profits until they bring them back home. Not surprisingly, many do not: American multinationals have some $2 trillion sitting on their foreign units’ balance-sheets, and growing. ... All this imposes big costs on the economy. The high rate discourages investment and loopholes distort it, because decisions are driven by tax considerations rather than a project’s economic merits. The tax rate companies actually pay varies wildly, depending on their type of business and the creativity of their lawyers: some pay close to zero, others the full 35%.

AS IF a global financial-market meltdown, the deepest U.S. recession in seventy years, an existential crisis in the euro zone and upheaval in the Middle East hadn’t already created enough trouble for one decade, now the unrest and anxiety have extended to some of the world’s most attractive emerging markets. Just in the past few months, we’ve seen a rough ride for India’s currency, furious nationwide protests in Turkey and Brazil, antigovernment demonstrations in Russia, strikes and violence in South Africa, and an ominous economic slowdown in all these countries. ... Adding to the uncertainty, as the carnage and confusion in Syria remind us, is the fact that there is no longer a single country or durable alliance of countries both willing and able to exercise consistent global leadership. ... it is all the more remarkable that there’s been so little noise from China, especially since the rising giant has experienced a once-in-a-decade leadership transition, slowing growth and a show trial involving one of the country’s best-known political personalities—all in just the past few months. Given that Europe and America, China’s largest trade partners, are still struggling to recover their footing, growth is slowing across much of the once-dynamic developing world, and the pace of economic and social change within China itself is gathering speed, it’s easy to wonder if this moment is merely the calm before China’s storm. ... Don’t bet on it. ... In a world where governments can’t afford to go it alone to protect their interests, China will struggle to build durable partnerships that extend its power.

In the name of emotional well-being, college students are increasingly demanding protection from words and ideas they don’t like. Here’s why that’s disastrous for education—and mental health. ... Two terms have risen quickly from obscurity into common campus parlance. Microaggressions are small actions or word choices that seem on their face to have no malicious intent but that are thought of as a kind of violence nonetheless. For example, by some campus guidelines, it is a microaggression to ask an Asian American or Latino American “Where were you born?,” because this implies that he or she is not a real American. Trigger warnings are alerts that professors are expected to issue if something in a course might cause a strong emotional response. For example, some students have called for warnings that Chinua Achebe’s Things Fall Apart describes racial violence and that F. Scott Fitzgerald’s The Great Gatsby portrays misogyny and physical abuse, so that students who have been previously victimized by racism or domestic violence can choose to avoid these works, which they believe might “trigger” a recurrence of past trauma. ... The dangers that these trends pose to scholarship and to the quality of American universities are significant; we could write a whole essay detailing them. But in this essay we focus on a different question: What are the effects of this new protectiveness on the students themselves? Does it benefit the people it is supposed to help? What exactly are students learning when they spend four years or more in a community that polices unintentional slights, places warning labels on works of classic literature, and in many other ways conveys the sense that words can be forms of violence that require strict control by campus authorities, who are expected to act as both protectors and prosecutors? ... social media has also fundamentally shifted the balance of power in relationships between students and faculty; the latter increasingly fear what students might do to their reputations and careers by stirring up online mobs against them.

Something else must be driving the fall in Chinese equities. ... What could that be? Have China’s banks overextended themselves more recently? Central planning or not, as we all learned in 2008, a surge in shadow banking can lead to terrible things. ... I am no expert on China, but it is very tempting to conclude that the Chinese gambling spirit has simply migrated from Macau to Shanghai. ... Relative to 1999, when the euro was first introduced as an accounting currency, Greek workers had at one point (around 2009-10) enjoyed almost twice the wage growth compared to the average German worker. Although much of the advantage has since been given up, Greek workers have still out performed their German colleagues since the introduction of the euro – at least as far as wage growth is concerned ... Ukraine, the Middle East and Puerto Rico are all in the dumps – but for three very different reasons. ... the deflation talk is likely to blossom up again, and several countries on either side of the Atlantic could be flirting with recession later this year or early next. Consequently, yields on long bonds could fall further, and stock markets may be in troubled waters for a while. I don’t expect this to be anywhere nearly as bad as 2008, though. It is a normal cyclical downturn, which may not even be strong enough to be classified as a recession. But a slowdown it is. ... I think the U.S. economy will substantially outperform most other OECD economies over the medium as well as the long term – even if there is a modest cyclical slowdown just around the corner.

A journey into one of the most remote and dangerous countries in the world ... Djibouti is a tiny state of citrus-colored shacks and goat-lined boulevards tucked into a barren, volcanic stretch of the Horn of Africa. It sits astride the narrow straits that lead to the Red Sea and the Suez Canal, and is home to the U.S.'s only permanent military base in Africa, Camp Lemonnier, linchpin of one of the Obama administration's most secretive and controversial programs: the drone-based campaign of surveillance and assassination against Al Qaeda and its allies in Somalia and Yemen. ... as Yemen has become the latest country in the Middle East to descend into a full-fledged civil war. In March, after Houthi rebels seized control of the government, a coalition of Arab states led by Saudi Arabia, which accuses the Houthis of being supported by its archrival Iran, launched a U.S.-supported campaign of airstrikes and imposed a land, air and sea blockade of the country — which it says is necessary to keep out Iranian weapons. ... Four months of bitter fighting later, the Houthis control even more territory. And the conflict has pushed this already impoverished country to the brink of a massive humanitarian catastrophe, with the aid community warning of an impending famine if the blockade is not lifted. ... Meanwhile, Al Qaeda has taken advantage of the chaos to seize wide swaths of eastern Yemen, including the port city of Mukalla, and has called for new attacks against the U.S. ISIS has gained a foothold and launched car-bomb attacks in the capital. Forced to evacuate its embassy and 125 special-operations advisers, the U.S. found its counterterrorism strategy in shambles, with many of the weapons and equipment it supplied to Yemen reported to be in the hands of militias.