As you may recall from previous years, the January letter is always about the mine field laid out in front of us. What could cause 2017 to be a year to remember? What could possibly go horribly wrong? At this point in time, I see many potential problems. I have some concerns about the US. I see dark clouds gathering over Europe, and I see very slippery conditions in many emerging markets (‘EM’). In other words, lots of markets around the world appear to be accident prone but for very different reasons ... The secret to being a good investor is to focus on risk management and to be well prepared for bad news. ... Stagnating economic growth and low – or even negative – real wage growth has created a deep level of dissatisfaction that the electorate chose to use politically ... EM non-financial corporates have continued to accumulate debt as if there is no tomorrow ... USD 890 billion of EM bonds and syndicated loans (an all-time high) are coming due in 2017 with almost 30% of that denominated in US dollars ... I usually focus on the negative aspects when investing; hence my writing also has a negative bias. That is not the same as saying that I am always bearish, and I am most definitely not particularly bearish going into 2017. 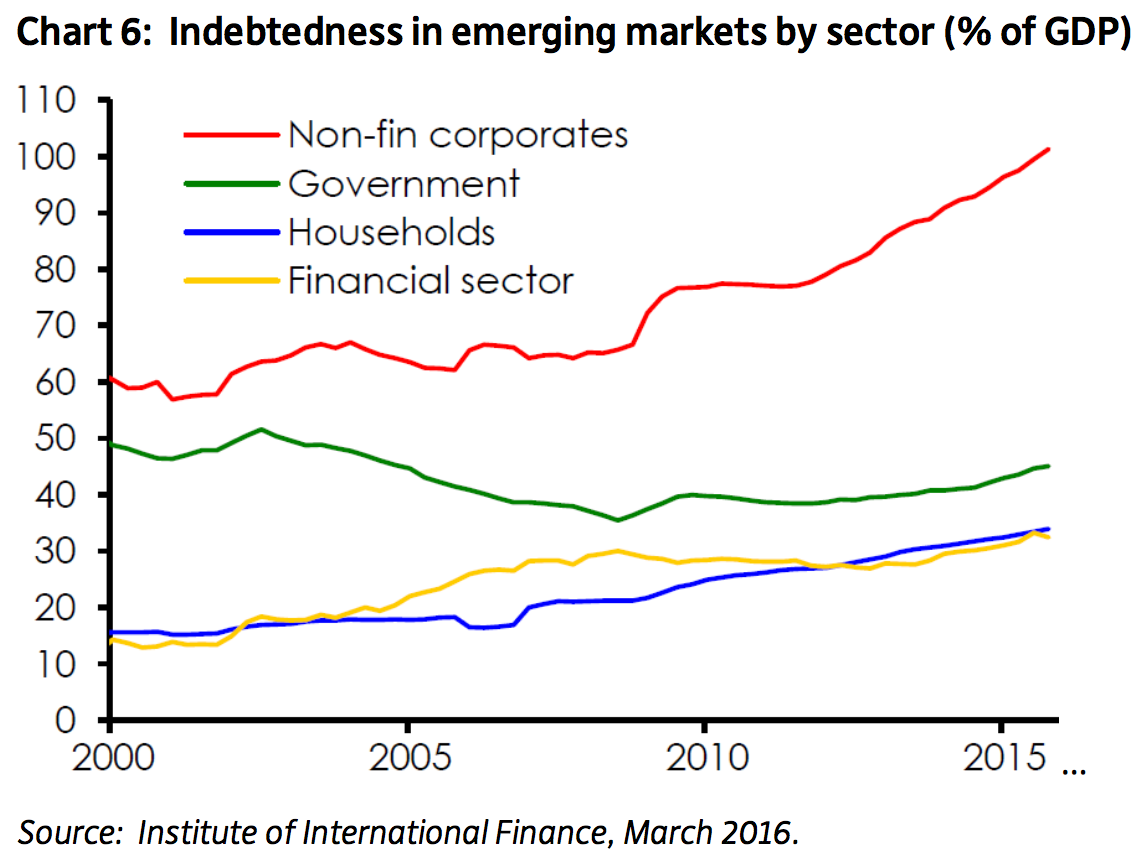 Deng Xiaoping created the city from bucolic nothing in 1980 as the pilot of his special economic zone project. These zones were meant to create safe places for Western companies to do business—and they worked. Even though China is not the boom-country it was two years ago, favorable trade policies and cheap skilled labor lure companies and entrepreneurs from across the globe to Shenzhen’s nimble factories. Before the SEZ, there were some 30,000 people in the area. Today, Shenzhen’s population is north of 10 million, and its port is one of the busiest in China. You already know this: Your iPhone is made here. Everything is made here. ... As of 2013, there were 22,000 permanent foreign nationals living in the city, and nearly 8 million others visiting every year. The expats range from the manufacturing-industry vet with a house and a spouse to the fresh-off-the-plane Kickstarter romantic with a pocketful of pledge cash to the English teacher who can’t tell a diode from a dinner plate.

As the longest-running longitudinal survey of intellectually talented children, SMPY has for 45 years tracked the careers and accomplishments of some 5,000 individuals, many of whom have gone on to become high-achieving scientists. The study's ever growing data set has generated more than 400 papers and several books and provided key insights into how to spot and develop talent in science, technology, engineering, mathematics (STEM), and beyond. ... the work to identify and support academically talented students has raised troubling questions about the risks of labeling children and the shortfalls of talent searches and standardized tests as a means of identifying high-potential students, especially in poor and rural districts.

And, as human birthrates fell, pets took the place of children in some families. In 2014 there were 179 million cats and dogs in the U.S., up from 98 million in 1980. Today, according to the American Animal Hospital Association (AAHA), more than 80 percent of pet owners think of themselves as their pets’ moms and dads. Americans love their pets so much, they spent $35 billion on veterinary care in 2015. ... In contrast to human medicine, in which everything from the nurse-patient ratio to the caloric count of injections is mandated and overseen by a web of government agencies, veterinary medicine is largely unregulated. And pet owners pay cash: Vets don’t deal with insurers haggling for better prices or questioning whether that vaccine or ultrasound or blood panel is really necessary. ... when veterinarians make fatal mistakes, they face no real financial consequences. The law hasn’t changed to reflect the attitudes of the average pet owner; courts still treat pets as property. ... a typical medical malpractice insurance policy for a veterinarian costs less than $20 a month. ... Corporations now own 15 percent to 20 percent of America’s 26,000 pet hospitals, and consolidators, copying the model pioneered by VCA, are buying them fast. ... The cost of veterinary care has risen even faster than the cost of human health care, more than doubling since 2000, according to the U.S. Bureau of Labor Statistics.

The mini-farm’s inventor, Ed Harwood, of Ithaca, New York, sold it to the school in 2010. Harwood is a sixty-six-year-old man of medium stature who speaks with the kind of rural accent that sometimes drops the last letters of words. He has been an associate professor at Cornell’s famous school of agriculture, and he began his career as an inventor by coming up with revolutionary improvements in the computer management of dairy cows, an animal he loves. ... After spending part of his youth and young adulthood working on his uncle’s dairy farm, he got degrees in microbiology, animal science, dairy science, and artificial intelligence, and applied his knowledge to the dairy industry. ... He first became interested in growing crops indoors in the two-thousand-aughts. Around 2003, his notebooks and diaries began to converge on ideas about how he could raise crops without soil, sunlight, or large amounts of water. ... Aeroponic farming uses about seventy per cent less water than hydroponic farming, which grows plants in water; hydroponic farming uses seventy per cent less water than regular farming. If crops can be raised without soil and with a much reduced weight of water, you can move their beds more easily and stack them high. ... Harwood solved the problem of the crop-growing medium by substituting cloth for soil. ... Agricultural runoff is the main cause of pollution in the oceans; vertical farms produce no runoff.