The New Yorker - Dirty Hands: A cheating scandal in the world of professional bridge. 5-15min

Bridge is a card game for four people. Like doubles tennis, it’s played two on two—although at a bridge table the partners sit opposite each other. (The seats are designated by compass points: North-South versus East-West.) There are many millions of players worldwide, and major tournaments attract thousands of entrants, but the arrival of new talent is a cause for celebration, because older players often worry that the game is aging into extinction. Successful young players stand out for another reason, too: bridge, unlike chess, has never been dominated by prodigies. ... The best players are able to deduce the presence of particular cards in opponents’ hands long before those cards have been exposed in play, based on what’s happened so far, and they think like oddsmakers. One of the longest chapters in the American Contract Bridge League’s “Encyclopedia of Bridge” lists precise probabilities for alternative approaches to playing hundreds of specific combinations of cards. No one would try to memorize all the percentages, but every skilled player acquires an increasingly comprehensive sense of what’s likely to work and what isn’t. ... Within a few weeks, what began as a single accusation had grown into a major scandal, involving the highest levels of international play. ... One of the reasons bridge continues to fascinate players all over the world is that, in order to become even sort of good at it, you have to be willing to be bad at it for a long time. ... Principled players do their best to ignore their partner and play at a consistent tempo, in order to avoid exchanging unauthorized information—and, if they do end up noticing something they shouldn’t have noticed, they go out of their way not to exploit it. Unprincipled players consciously take advantage of such information. And, occasionally, they go a great deal further than that. ... Now that they do understand, cheaters will become craftier in their deceptions, and the main tool for catching them will almost certainly be statistical analysis of suspicious results.

Bir Tawil is the last truly unclaimed land on earth: a tiny sliver of Africa ruled by no state, inhabited by no permanent residents and governed by no laws. To get there, you have two choices. ... The first is to fly to the Sudanese capital Khartoum, charter a jeep, and follow the Shendi road hundreds of miles up to Abu Hamed, a settlement that dates back to the ancient kingdom of Kush. Today it serves as the region’s final permanent human outpost before the vast Nubian desert, twice the size of mainland Britain and almost completely barren, begins unfolding to the north. ... The second option is to approach from Egypt, setting off from the country’s southernmost city of Aswan, down through the arid expanse that lies between Lake Nasser to the west and the Red Sea to the east. Much of it has been declared a restricted zone by the Egyptian army, and no one can get near the border without first obtaining their permission. ... Both nations have renounced any claim to it, and no other government has any jurisdiction over it. 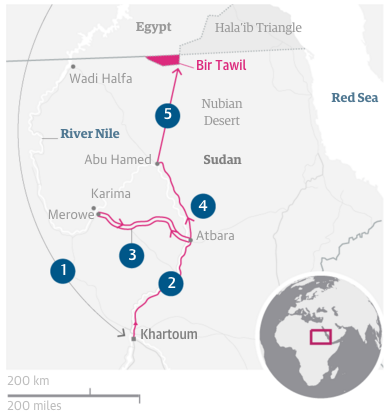 There are 1,480 living species of cacti, all but one indigenous to the Americas. The journal Nature Plants recently studied the level of danger to almost every species on earth––the largest study of any plant taxon––and the alarming result was 31 percent are threatened, the fifth most of any taxonomic group, just behind amphibians and corals. Loss of habitat to humans and the clumsy plodding of livestock factored highly. No surprise. But what shocked the report’s author was that the largest extinction threat comes from horticulture, specifically the illegal collection and trade of cacti. ... Last October, Chinese and German customs agents busted a smuggling ring and seized 1,250 plants, some rare and endangered cacti. As might be expected, there are few scholarly reports investigating the cactus black market. One such report, called “Prickly Trade” (the cactus world is full of egregious puns), estimated that in one three-year period people illegally plucked about 100,000 cacti out of the Texas wild or smuggled them over the Mexican border. That was in 2003. Then Internet commerce arrived. A report from 2012 monitored just 24 online cacti sellers for 1,000 purchases. These were not just any 1,000 cacti. Each was listed as an “Appendix I” specie by the Convention on International Trade in Endangered Species of Wild Fauna and Flora (CITES), which are plants threatened with extinction. To trade any of these, a seller needs a permit. Of the 1,000 cacti researchers monitored, the report found at least 90 percent had traded hands illegally.

At the heart of bullfighting is an hourglass hemorrhaging sand. Everyone moves through time and then, at some point, we look around to find time moving through us. The matador must confront it every day, every second, and each moment of their working life, struggling in the past, present and future of a perversely insular world as death looms close enough to feel its breath on the cheek. Bullfighting is every bit as ghoulish and savage as its critics warn, but it is equally as powerful and moving as its supporters insist. Perhaps the most vexing aspect about it is that neither group is wrong, they are both telling the truth. At the heart of all romanticism is suffering. ... In film or on stage, in reflecting life through art, an actor has a second take or another day with his or her performance if something goes wrong. Bullfighters are spies crossing into enemy lines. Any mistake, no matter how minor or trivial, is potentially fatal. All the chips of a human life are pushed in against a bull that has been nurtured to fruition like a fine Burgundy wine or Stradivarius violin — to be the finest specimen on earth — calibrated with immense precision toward aggression, courage and violence. Before a toro bravo enters the ring on his last day, by Spanish law, he has lived five years without ever having seen a man stand before him. In Greek myth, virgins were sacrificed to the Minotaur, in Spain, the tables are turned and the bull must confront this ritual as a virgin. He learns fast, but the bull has just 15 minutes to make sense of being shipwrecked into his fate inside a ring and ascertain this nightmarish setting is all for his demise. And the matador’s art form is to honor the condemned, which, inescapably, symbolically, is the fate of us all on this side of the earth, heaven above, and hell below.